As we know India is a huge country with a population that ranks second only to China. Every market within the country, therefore, has great potential, and with the country’s religious customs and traditions, the wholesale hair replacement products market, is particularly profitable. In addition, more and more local people, especially men, are experiencing hair loss problems and they are now prepared to act on this.

In previous generations, your average person cared less about their appearance. Today’s world of celebrities and social media is very different and as such, more and more people are paying attention to every aspect of their appearance. There are much more options out there for people who wish to change or enhance their appearance. In terms of hair, wearing a hair replacement is the best choice for 90% of the people who suffer hair loss problems. India is no different from other countries in that regard and over the course of this blog, we will specifically focus on the hair replacement system wholesale market in India.

In the early 90s, Indian was the biggest human hair supplier in the global marketplace. According to figures, they exported 10 million tons of hair a year with a total export value of 400 million US dollars. But why does India have so much hair to export?

The answer is tied closely to religion. Around 80% of India's population (equivalent to almost one billion people) is Hindu. There is a long-standing religious custom in Hinduism that requires young girls of a certain age to go to a local temple and have their heads shaved as a way of seeking protection from the Hindu gods. It is not only young girls who have their heads shaved. Women of all ages will make pilgrimages to temples to sacrifice their hair in return for a favor from the gods or to simply offer their hair as a sign of thanks. Therefore, in some temples in India, it is common to see enormous queues of people waiting to undergo tonsure – the practice of cutting or shaving some or all of one’s head for religious reasons.

However, not all Hindus can donate their hair. First of all, they must never have had their hair dyed or permed. Girls will often have used natural coconut oil to maintain their hair. People who meet these requirements can donate their hair to the gods. It is these specific requirements that mean such hair can be referred to as virgin hair. Over time, temples have found a profitable business opportunity in collecting this type of hair and wholesale it to hair replacement product companies in China and Africa. It has been reported that one particular temple in Madhya Pradesh can make close to 30 million US dollars a year by selling virgin hair. 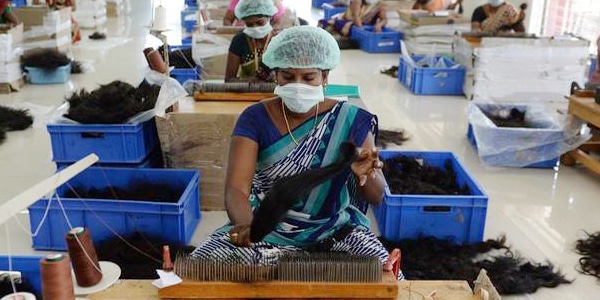 Despite the sheer volume of hair collected in temples, the profit margins in exporting hair are very small. Businessmen have found that the local hair replacement market is a lot bigger than they initially imagined. They have consequently started to produce hair products such as hair wefts and hair replacements with their own hair to then sell to local users or local salons or studios for resale. Hair wefts are easy to produce as they just require the use of machines to sew the hair together. Hair wefts are mainly exported to Africa. Compared with hair wefts, the production of hair replacements is very complicated since all the work needs to be done by hand. In recent years, a small number of Indian businessmen have started to learn basic hair system-making techniques from China, Japan and South Korea. Some local factories in India are also producing hair toupees. However, because the current processing technology in India is not as developed, the toupees produced in India are generally rough and not particularly natural or comfortable. Of course, the price of such toupees is very cheap, which in turn meets the needs of domestic consumers who have a relatively low consumption level and do not overly care about a natural effect.

Though they are capable of producing hair replacements by themselves, most hair toupee suppliers in India usually buy hair toupees from China, Japan, South Korea or the USA to resell them to men who want high-quality, undetectable toupees. As a result, the hair replacement wholesale market in India is very big.

More and more hair toupee suppliers in India are coming to China to find the hair replacement systems they need. New Times Hair has, over time, become a popular choice for many suppliers from India.

New Times Hair is a professional hair replacement system wholesale supplier. For the Indian market, we would like to recommend the following products:

For people who want a hair replacement which can last a long time without the need to change it often, we suggest something with a strong, fine mono base. These units can last around one year if the customer takes proper care of it. The prices are also cheap. Take a look at the HS27, the D7-3 and the P1-3-5 on our website for these kind of durable hair systems.

The base design of all these hair systems is fine mono with PU around the perimeter. There are strong, double knots on the mono area and single split knots on the PU coating which means hair will not shed easily. Customers can use tape on the PU perimeter which is easy to clean and maintain. Mono lace is the strongest lace and it is difficult to damage. It is also breathable.

Customers can cut the HS27 into smaller sizes to fit different-sized scalps. The D7-3 and P1-3-5 have 1/8” of folded lace or ¼” lace for a natural look. The lace will not last as long as the PU but if the lace gets damaged then the customer can cut it and just have the PU exposed at the front.

For people who want a fully natural, undetectable look, then we suggest the following bases: the HS25, the HS7, the HS1 and injected lace. These kinds of hair replacement systems are also very popular in Europe and North America.

The HS1 and the HS25 are thin skin toupees. The HS1 has a super thin skin base with a thickness of 0.08mm. We do ½” V-looped hair with a graduated hairline to get a realistic front appearance. The other areas of the base have single split knots which are strong and durable making hair shedding less of an issue. The lifespan is around three to six months.

The HS7 is another best-seller among our stock toupees. The HS7 has a fully French lace base which is soft, lightweight and breathable. We do bleached knots to make the knots invisible which gives the piece a very natural appearance. It has a lifespan of around three to six months.

Finally, there are injected lace toupees. These are particularly popular on the Indian market. Most Indian salons or studios hold them in stock and sell them to local customers. Injected lace is also called silk top. The advantage of this ventilation method is that there are no knots on the hair side of the lace base. The hair looks as if it is growing directly out of the scalp. This ventilation technique is complex though. It requires highly-skilled knotting work and takes a lot longer to produce. For this reason, the cost is higher than other ventilation methods but the result is absolutely worth the extra cost. The lifespan for these kind of hair systems is around one year.

Economic development is driving the progress of consumption. We believe the Indian hair replacement wholesale market, especially the market for high-end hair replacement, is becoming more and more open. New Times Hair is ready and willing to assist you in taking advantage of the opportunities that are being created.

Category: Blog    |   Related Post: How to Create a Natural Front Hairline for a Hair System

Monica joined New Times Hair in 2013. She is responsible for dealing with sales and aftersales inquiries. She brings a catalogue of experience in the field of hair replacement systems and women’s wigs. Monica works closely with the sales team and the central management team on business development.

How to Create a Natural Front Hairline for a Hair System

What Are The Features Of The Wholesale Hair Pieces Market In The USA?

Newtimes Hair have a dedicated online customer service team， we guarantee a fast and accurate response to your enquiry.
Contact now! We will be getting back to you immediately!